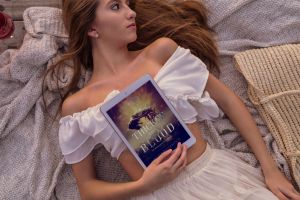 Sorry I’m a few days late writing up this post, guys. I forgot how hectic releasing a book can be, and usually I write up the post a week in advance. But anyways, here I am, so let’s talk about this book’s release.

For those of you who don’t know, TTB originally released back in 2014. It was the second book I self published, and at that time I still didn’t really know what I was doing. I didn’t have the money at the time to buy a custom cover, so I bought a pre-made one (not that there’s anything wrong with pre-made covers, but the one I bought didn’t match the genre of the book) and I also did the interior design myself… in Word… without having any idea how to do something like that (so it was pretty rough looking haha).

Fast forward to now! We’ve finally made it to release day. There were some days I worried I would never make it to this day. This book’s re-release has been in the works for several years now, and these past couple months I put as much attention and work into this book to ensure that the re-release wouldn’t have the same errors as the original.

Mind you, the story itself hasn’t changed. But I edited the book (again), fixed minor issues here and there (that you won’t notice unless you read the original), and obviously we got a new cover (thanks to Hell Yes Design) and I redid the interior design (thanks to Vellum).

The paperback will also be available on B&N, but that usually takes a couple weeks before it shows up (for whatever reason) –so I’ll update this book when I have that link (and you can find it on the books page as well).

It’s really refreshing to see the covers coming together, and now they actually look like a series standing side by side!

Now there’s only one more book left in this series that needs a new cover –and once that’s done the entire series will be complete! It’s taken a long time, but we’re so close, and I’m excited to be almost done with this project so I can focus 100% on new stories.

I can’t guarantee when Bloodline Inheritance will be re-releasing. 2020 is when I plan on releasing Clara and Daphne, so unless I need more time with that book and decide to push back the release date, it might not be until 2021 that BlIn re-releases. But who knows, plans constantly change, and I don’t have that solid of release plans for the future, so for now hold tight, and we’ll see what next year brings us.

Lastly, before you go, I just wanted to thank everyone for their ongoing support with this series and my writing in general. It means a lot to me, and you guys made release day a success. Thank you so much, especially for your patience, since the re-releasing of this series has been quite time consumed and even at times unpredictable.

That’s all for now, guys! I’ve got some serious writing to catch up, so I can finish this first draft. In the meantime please go give TTB some love and check it out, won’t you?