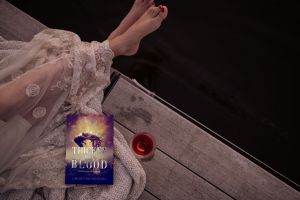 Hey guys! Sorry I’m late on posting this –this month has been super busy for me, but I have good news.

Thicker Than Blood will be releasing on August 10th. If you haven’t already check out my Instagram –you can see what the proof of the paperback looks like! (It looks great!) And in the meantime while you’re waiting you can pre-order the ebook on Amazon.

If you pre-order the ebook now you’ll be able to start reading the book on release day, August 10th!

The new edition includes a new cover (designed by Hell Yes Designs), new interior formatting (because I finally have a program for that), as well as some other minor changes. All in all, the book has improved greatly since 2014, and I’m excited to be sharing the new edition with you. We’ve come a long way since then, and it’s nice to see Alaire’s story finally getting the makeover it deserves.

I am so excited to be re-releasing this book and right around the anniversary of its original release too (Aug 1, 2014)! I’ll be keeping you guys up to date with purchase links and hopefully be doing a video on IGTV later this month about the release.

Thank you guys as always for your support. We’re so close now –not too much longer!